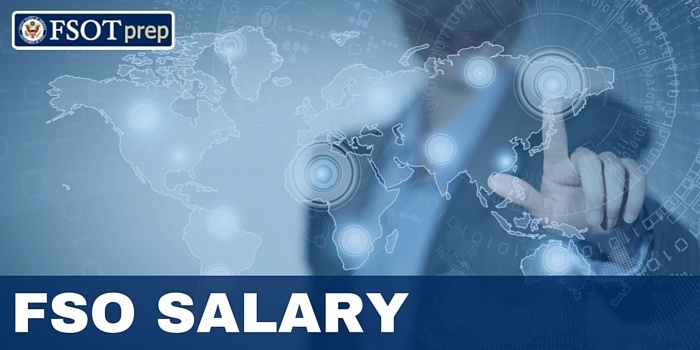 In what follows I'll only discuss the allowances that are applicable to every Foreign Service Officer salary. A list of all allowances and benefits can be found on the website of the Office of Allowances.

The basic Foreign Service Officer salary is determined the Foreign Service Pay Scale, which is a system of pay grades (FP) and steps, plus an attempt by the Department of State's Bureau of Human Resources, Office of Recruitment, Examination and Employment to match your current salary.

To determine what grade and step you enter in as a beginning FSO, the Bureau of Human Resources looks at your previous education and your "qualifying experience" (QE).

Your education level corresponds with your obtained degree while QE can be summed up as work "which is predominantly intellectual in character and which includes work requiring the consistent exercise of discretion and judgment. Advanced knowledge must be in a field of science or learning customarily acquired by a prolonged course of specialized intellectual instruction” (Source: career.state.gov).

Only full years of working experience will be counted. If you have 3.5 years of experience, that equals 3 years of QE.

Each year of QE equals a step up within your grade, but you can never go up a grade in the FS Pay Scale simply by having a lot of QE. Thus, if your QE would put you a step higher than 14, you'd stay at 14 within the same grade.

Once your grade and step within the Foreign Service Pay Scale have been determined, the Bureau of Human Resources will check whether you'll lose money by joining the Foreign Service. This means that they'll check whether the salary linked to your place on the FS pay scale is lower than your current salary*. If so, they'll move you up one or more steps within your grade until you reach an FSO salary that's slightly higher than your current one. They will, however, never move you to a higher grade.
[TABLE FSO BASE SALARY: http://www.state.gov/documents/organization/240454.pdf]

*NOTE: "current salary" means the salary you earned for at least 90 days prior to being appointed as a Foreign Servicer Career Candidate. If you're already a federal government civilian direct-hire employee, you have to have worked as a federal employee up until three days before your appointment.

An FSO doesn't stay in the same spot on the Foreign Service Pay Scale forever. He or she can acquire a more senior rank when being promoted. Promotions can be obtained once a year and depend on the needs of the State Department and the performance and potential of the FSO's.

Let's have a look at those that affect every FSO's salary.

[INSERT ONE LOCALITY TABLE AND THE OVERSEAS TABLE FROM HERE: http://www.state.gov/documents/organization/240454.pdf]

*NOTE: If you are already a federal government civilian direct-hire employee receiving a locality allowance, you can add that allowance to your salary and use that as the "current" salary upon with your salary matching by the Bureau of Human Resources will be based.

If you're assigned to a post overseas, you'll receive an extra allowance depending on how dangerous your destination is considered to be. A FSO can acquire a Danger Pay Allowance if the Secretary of State has established that the health and well-being of the majority of the employees of a foreign post are threatened by civil insurrection, civil war, terrorism or wartime conditions.

It's important to know that you'll only receive a Danger Pay Allowance for a day if you've spent at least four hours of that day at your post/in your host country.

Once every two years, the foreign posts submit a Dangers Pay Factors Form so that the Department of State can review the Danger Pay Allowance allotted to them. This can also happen sooner if the situation demands it.

Rates
The Danger Pay Allowance is a taxable supplement of 0-35%, calculated based on the total of the Foreign Service Officer base salary + the overseas comparability pay.
For a complete list of foreign posts and their Danger Allowance Pay rates, check the Department of State's Danger Pay Allowance Table.

What?
A Hardship Post Allowance or Differential will be approved...
“For any place when, and only when, the place involves extraordinarily difficult living conditions, excessive physical hardship, or notably unhealthful conditions affecting the majority of employees officially stationed or detailed at that place. Living costs are not considered in differential determination” (Source: Office of Allowances).

FSO's who are stationed at a Hardship Post receive a hardship differential of 5-35%, depending on the severity of the hardship, when they are at the post for at least 42 consecutive days. On the 43rd day, the differential will be allowed, both for the following and for the previous 42 days.
Foreign posts need to fill in a Post Hardship Differential Questionnaire twice a year on the basis of which the Department of State determines if and how high of a Hardship Post Allowance they receive.

Rates
Just like the Danger Pay Allowance, the Hardship Post Allowance is a taxable supplement of 0-35% of the overseas comparability pay.

What?
Unlike the Danger Pay Allowance and the Hardship Post Allowance, COLA is not taxable and not calculated based on the FSO's overseas comparability pay. Instead, it is a percentage of his/hers spendable income.

Spendable income is that part of the Foreign Service Officer Salary that is used to purchase goods and services. It is calculated on an annual base by combining the FSO's overseas comparability pay and his/her family size.

All goods and services are categorized in the Cost of Living Market Basket. This market basket is an index in which the different categories are assigned percentage weights. The categories of the market basket are the same for every post, but the weights of the categories may vary. It is based on those weights that the cost for goods and services - the cost of living - in foreign posts is compared with that in Washington D.C.. Thus, you could say that the market basket of Washington D.C. acts as the standard here. The greater the weight, the higher the COLA the FSO will receive for his spendable income.

The market basket weights for foreign posts are calculated once every four years. Not every foreign post receives COLA, but most do.

For a full list of Cost of Living Allowances, check the Department of State COLA Table.

I realize the above can be a bit overwhelming, so I've put together an example calculation of a fictional FSO's salary.

Our fictional FSO is called Mark. He has a master's degree in political science and 1.5 years of relevant working experience. In his previous job as a consultant he earned an annual income of $53,000. For his first job, Mark has been assigned to a post in Russia. His wife and two kids will go with him.

Hi, my name is Mathew Jennings and I am the editor of the FSOT Prep. I have served all over the world in places like Haiti, South Korea, and even Sri Lanka. Using my experience and that of past and present FSOs, this site was developed to not only help potential Foreign Service Officers pass their FSOT, but also their QEP, FSOA and ultimately become a FSO themselves. FSO Requirements: The Stuff They Don't Exactly Tell You ...

Hi Matt/Matthew! I'll be taking the FSOT in October and was wondering if you'd be willing to review my PNs. Please let me know. Thank you!

I took the test 5x up to early 2000's;I almost passed the fourth time with a 143+score. I studied in the 5th Ave NYC Library and had some Prep with studying books. I plan to prepare extensively with my Retired Ambassador NYU Law School moderator -mentor and good friend on Int'l Cyber Crime with International military and Gov't attorneys...and more. I am a NYU TANDON SCHOOL OF ENGINEERING M.S.2010 TECHNICAL WRITING AND JOURNALISM FELLOWSHIP who was a Paralegal applying to law school with several disappointments and adversities in my life,...four hidden multidisabilites and unsuccesful to be a military veteran 3x -West Point Congressional nomination but no Freshman Plebeship, USARMY ROTC one year and then failed Engineering College, enlisted nonveteran USMARINE CORPS to be emotional illness PTSD all at age 18 forever changing my life-or spending 20 years since 9/11 to return to Auxiliary NYPD. I am a nine year member of the US DEPARTMENT OF HOMELAND SECURITY/ US COAST GUARD AUXILARY. My publisher wants me to write a book how and 1001 Why mantras I never gave up to overcome as a minority Jamaican American male with a young grandma PhD Education Administrator Philipina future wife in 5 years. I had a "raw deal" in my life...but my latter years will be greater. I am interested in a Management or Policy Track or such redeeming the needy in developed countries like immigrants/refugees and more...I can really identify being a minority from a first rate university education and first world being underemployed and lack of networks and opportunities as a hidden multidisabled person recovering five years from leukemia cancer. I still believe in the American Dream as a person of faith like the Jewish gov't official Daniel in the Catholic Holy Bible Old Testament.

How about student debt in good status??

We are a participant in the Amazon Services LLC Associates Program, an affiliate advertising program designed to provide a means for us to earn fees by linking to Amazon.com and affiliated sites. See Affiliate and Legal to learn more about our operations.